The Battle of Shiloh was one of the major early engagements of the American Civil War. With more than 23,000 total casualties, both the Confederate and Union forces suffered heavy losses, making it the bloodiest battle in U.S. history at the time. The Corinth Civil War Interpretive Center is dedicated to educating the public on the significance of the battle, as well as its greater importance in context of the Civil War and the history of military warfare.

Corinth was one of two vital rail and river crossroads for the movement of troops and supplies curing the Civil War. It also hosted the first “Contraband Camps” for the receiving of runaway slaves and their subsequent education or training for incorporation into the Union Army. The camp was the first step on the road to freedom and the struggle for equality for thousands of former slaves.

On April 6, 1862, forty thousand Confederate soldiers bore down on the unprepared Union army camped near Pittsburg Landing on the Tennessee River. Over the next two days, the Battle of Shiloh would rise against General Grant’s army in what would have been a crippling blow to the Union army. The tides turned as reinforcements arrived on April 7, and Grant’s army drove Confederate forces from the field.

Even beyond the immediate war, Shiloh’s legacy was not fully realized until WWI. After the Civil War, European military strategists visited the earthen fortifications and trench systems in Corinth and Shiloh. The efficiency and effectiveness of these systems gained worldwide notoriety as the squalor and misery of trench warfare in WWI unfolded.

To commemorate the events at Shiloh, the National Park Service (NPS) and the Siege and Battle Commission set out to build an interpretive center in the middle of the Shiloh battlefield. This central location is not actually in Shiloh, Tennessee, but rather in Corinth, Mississippi, only a stone’s throw from the Battery Robinett, the earthen fortification that controlled entry and exit into the city. Knowing this may be the only Civil War site many people visit, the clients also wanted to place it within a greater historical context.

In previous generations, visitors viewed Civil War battle sites through the lens of “my people,” looking for familiar names and direct ancestors. That lens grows darker as contemporary Americans are less and less connected to the war of 150 years ago, and many who have immigrated since then have no family connection to use as a reference point. It falls to monuments and their keepers to create these touch points, experiences that bring history to life for a new generation.

[The Corinth Civil War Interpretive Center] is one of the most unique and striking visitor’s facilities in the entire National Park Service System.

Tragic and humanitarian histories converge throughout the battle site, and it would fall to Overland to craft a monument to bring them to life. For the Confederate infantry zigzagging up the hill toward the Union Army, the landscape was littered with detritus shed in the heat of siege. Similarly, as they approach the interpretive center, visitors pass bronze castings of coats, canteens, broken wagon wheels, and other gear littering the hillside until they reach the concrete redoubt.

Once inside, art and artifacts bring to life the battle and its wider significance within the Civil War and the history of military warfare. Overland preserved this tragic piece of history in the design of the building: a low-slung profile, a metaphor for the fortifications and earthen structures that once occupied the hill, offers prospect and refuge looking out to the preserved gunneries. The design team incorporated local materials like stone and rammed earth, echoing the antebellum Mississippi vernacular. The heavy timber structure recalls the brace work of the emplacement and the critical role of the railroads here. Visitors are immersed in the battlefield rather than observing from afar.

After the intensity of the battlefield, the experience transitions into reflective space. A water feature illustrates the disruption of war and resilience of the American union. Water cascades over rocks representing the major battles of the Civil War, and reconvenes in a calm pool. Around the pool, bronze leaves pay homage to the state trees of those who died at the battle of Shiloh.

Life-size bronze statues honor the Contraband Camps, depicting poignant moments of learning and empowerment, as African Americans made their first embattled steps toward freedom. In this quiet place, visitors can reflect on the progress our country has made, and the distance yet to go in the pursuit of liberty and justice for all. 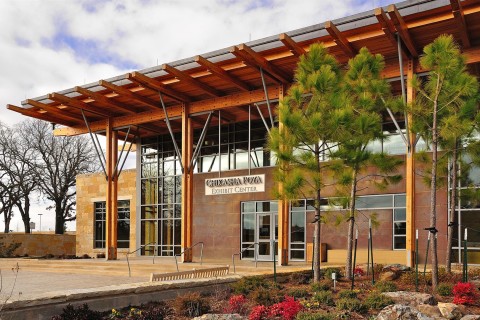