The Chickasaw Nation was at risk of losing their history. The seminomadic people had few relics or physical reminders of their heritage, and yet they wanted more than casinos to carry their culture forward. The Chickasaw Cultural Center was the first physical representation of their collective story, a place to proclaim their identity to the world, and to themselves.

Migration And Displacement
The Chickasaw people migrated from the “land of the setting sun” to the hardwood forests of Mississippi before recorded history. Following a mythical path under the leadership of their creator god, the nation eventually settled in the southeast, where their territory grew to encompass parts of Mississippi, Alabama, and Tennessee. Accomplished hunters and warriors, they were Mississippi’s largest indigenous people group until their removal to Oklahoma in the nineteenth century.
Tangible Presence
Acquiring the land for the Chickasaw Cultural Center required a complicated land swap between the Chickasaw Nation, the US National Parks Service, and the City of Sulphur, Oklahoma. However, the clients were determined. They needed a place to tell their story, which up until now was primarily an oral history. Now they wanted a physical reminder of their culture and the lands that shaped them. Walking Through A Story
Overland organized the cultural center around the culture and mythology of the Chickasaw people. Their practice of holistic, spiritual medicine and their creation story formed the logic for the site, which welcomes small groups and individual visitors, as well as the annual convocation of twenty-five thousand to forty thousand Chickasaw people. While some spaces reflect the nation’s history in the tall forests of Mississippi, others demonstrate a deep connection to their new home in the western prairies. Welcome spaces are tall and open, with towering columns. Programming spaces are scaled more intimately, with the prairie literally rolling up over the stone buildings to create vegetative roofs. Two central courtyards open up the building to even more versatility, allowing programming to move outdoors when weather permits. Overland incorporated the hammered copper of sacred vessels into the design, as well as a water pavilion and sky pavilion to connect visitors to the treetops—an element that honors Chickasaw warriors and hunters who were master climbers in the hardwood forests, a proud element of their military history.

Upon arrival into the museum, visitors are given a bracelet with a microchip that assigns them to a clan. As they move through the building, their bracelets will activate clan-specific exhibits and interpretation, to provide a highly interactive experience. Guests first gather in an orientation theater made to look like a council house. At the end of the orientation film, the guests are formally welcomed into the Chickasaw world. The screen lifts, and they enter a “spirit forest” experience where the exhibits come to life as they move through the space. This immersive interpretation so thoroughly integrated through the architecture and exhibit design gives the Chickasaw Nation a tool to tell their own story as they look to a bright future that matches their proud past.

Great pains were taken to ensure this world-class center will help preserve Chickasaw history and traditions for generations to come. 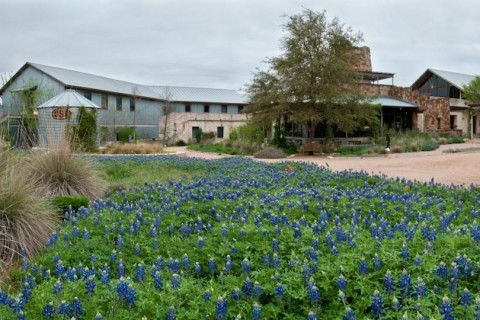