San Antonio’s Paseo del Rio, or Riverwalk, is a civic and commercial success of world renown. When the client wanted to reintegrate the Qinhuai River—a waterway iconic in local lore and literature—into the grid and culture of Nanjing, a city with origins dating back to the Ming Dynasty, Overland was poised to offer insight into the ingredients that create a thriving urban economy, drawing participation from visitors and locals alike.

Arteries of economic growth
“A city’s relationship to its rivers can be one of its greatest advantages in commercial growth and quality of life,” stated Principal in Charge, Tim Blonkvist. The natural appeal of a riverside stroll encourages families, couples, runners, and dog walkers to get out outside and enjoy their city. Constant foot traffic flows past local retailers, and other small businesses located along the river walk fuel an economic engine for the entire district. Even shops without money to spend on marketing can thrive with a steady stream of window shoppers passing on a daily basis to enjoy the urban oasis.
Think big
Nanjing wanted just that. Underutilized riverfront space held the promise of prosperity for the city’s West Gate. It would require an approach to urban design wholly different from what they were used to and immense creativity to work within government imposed historical restrictions. Throughout the paradigm shift, Overland led the conversation with a clear vision of how deeply beneficial the project could be, not only for the clients, but the entire city of Nanjing. They had witnessed such success in their own backyard.
Density matters The original models for the development maintained density well below that of the surrounding city and allowed businesses along the river to build right up to the banks, hindering pedestrian access. By focusing on density, Overland helped the client develop a ratio for success. “What started as a conversation about one project soon grew to an ongoing dialogue on urban planning as a practice,” said Samantha Schwarze, Senior Urban Designer.

Commercial live-work-play spaces like the one proposed on the banks of the Qinhuai thrive on optimum density. They need a healthy supply of diners, shoppers, and renters to generate demand for the goods and services in the area. To keep it from feeling crowded, the river walk could serve as a linear park, or free space.

People of all ages are drawn to a healthy, enjoyable space they can activate on their own terms. Residents would flock to the river walk if they felt free to come and go as they wished, with plenty of access to goods and services along the way. Finding this attractive yet profitable density allowed the development to exist without subsidy, able to grow and contribute to the city at large.

In the design of the river walk, Overland sought to connect past and present. The scale of the buildings created a transition zone between the small-scale traditional buildings and the late twentieth-century high-rises scattered among them. Calling on the rich history of urban design from the Ming and Qing dynasties, Overland used those successful typologies to place the new development firmly in its context.

IN ASSOCIATION WITH ARUP 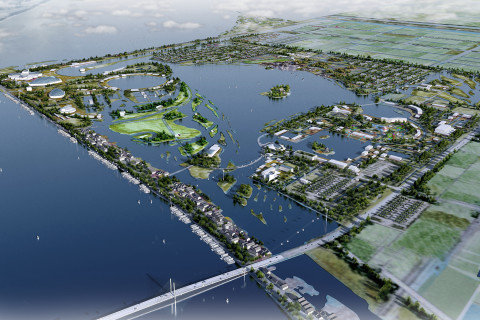