Located on a three-hundred-acre site, the Lady Bird Johnson Wildflower Center is dedicated to the conservation of native plants, boasting more than fifteen acres of landscaped gardens and courtyards that showcase an abundance of Texas’s magnificent native wildflowers, grasses, shrubs, and trees. It offers access to meadows and trails and an adjacent one thousand acres of reserve

When Overland Partners submitted a proposal for the Lady Bird Johnson Wildflower Center, they did so knowing they were competing against some of the best firms in the world. Then just a handful of young architects with no showcase work in their portfolio, Overland was surprised and delighted when Lady Bird selected their firm to design what would become one of the world’s prototypes for the sustainable building movement that would soon follow.

Nature’s First Lady
Former First Lady of the United States Claudia Alta Taylor “Lady Bird” Johnson is a national treasure and icon in the state of Texas. Her work preserving and expanding the wildflower population of her beloved Hill Country has endeared her not only to the conservation community but to all those who enjoy the dense fields of color that blanket roadsides, pastures, and grasslands in the Texas springtime. Lady Bird’s dedication to environmental conservation led to the establishment of the Wildflower Center, a nonprofit organization devoted to preserving and reintroducing native plants in planned landscapes.
Ahead Of The Times

In the early 1990s, architecture was still considered anathema to the environmental movement. LEED standards had not yet been established, and advocacy groups had not yet encountered architecture that honored the site and landscape around a building. Into this somewhat oppositional context, Lady Bird gave Overland Partners an ambitious charge, telling them that she wanted the building to “look like God put it there.”

This mandate both humbled and emboldened the architects. It set an impossible standard of quality, but it also framed their interaction with the landscape. This rationale for an organic, life-giving building placed the project on the cutting edge of a green building movement that would dominate the field of architecture in the decades that followed.

What a joy it is to visit the Center! I never tire of looking at the beautiful buildings Overland Partners created – each visit brings new discoveries and makes me so grateful for your talent!

The responsibility of creating such a significant work in honor of such a significant muse was not lost on the architects. While the materials they used—brick, stone, wood, and steel—were ordinary, the ambition of the project was entirely innovative. Rather than making a strong statement in the voice of the designer, the building purposefully reflected Lady Bird’s voice, her deep care for the land.

Among the highlights of the facility are a wildflower meadow, a visitors’ gallery with museum-quality exhibits, a children’s educational center, and one of North America’s largest rooftop rainwater collection systems with a 45-foot stone observation tower as its centerpiece. The complex also includes a 232-seat auditorium that allows the center to host national conferences, two multipurpose classrooms, two greenhouses, a combination library/reception room, a research building, gift shop, and cafe.

Without codified standards to guide them, Overland employed “total resource conservation” while showcasing the beauty and benefits of native landscape. They employed a complex range of what were for that time novel techniques, including site analysis, material selection, energy use planning, and construction. Many of the sustainable practices employed are now part of standard best practices in architecture, such as passive solar heating, pragmatic building orientation, use of recycled and reclaimed materials, and reuse of excavated material integrated in the design. Uniting the entire complex is the rainwater harvesting system, capable of collecting 300,000 gallons of rainwater per year.

The year it opened it was named  the most provocative project of the year, and the building was featured on the cover of Architect Magazine. While the global architecture community took notice of the design’s novel approach, it was the aesthetic conversation with the landscape that won the hearts of the community and ultimately contributed to the strengthening of conservation efforts.

“Sometimes creating places that are worthy of our affection are as important in sustaining a place as any technology or other sustainable concept,” said Principal in Charge Rick Archer.

The Center has become a major contributor to sustainability research and education and now hosts more than 100,000 visitors annually. In conjunction with the American Society of Landscape Architects, the Center developed the Sustainable Sites Initiative, a rating system that assesses the sustainable design, construction, and maintenance of landscapes.

Archer is still moved by the letters he receives from those who have been impacted by the project. For many, it is simply a place they love to be, while for others it is something more transcendent—true communion with the natural world.

In the words of Lady Bird Johnson, “What a joy it is to visit the Center! I never tire of looking at the beautiful buildings Overland Partners created. Each visit brings new discoveries and makes me so grateful for your talent!” 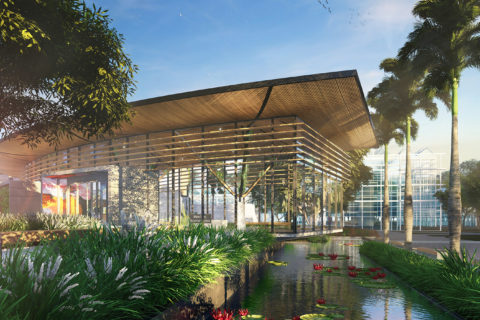