When Prairie View A&M hired Overland to design their new Agriculture and Business department building, they assumed it would primarily include classroom space. However, one site visit quickly revealed what was truly lacking on campus: a common social space. The students of Prairie View needed a hub for student life, which became the driving force behind the concept of the building.

Prospect And Refuge
Currently, the Panthers’ social activity takes place on The Hill, an unstructured outdoor space. Without shelter from wind, sun, or rain, events like the popular “Hump Day on the Hill” have been at the mercy of the elements. Student life thrives in predictable environments where there’s always a place to sit, a friend to catch, and a passing flow of peers to observe. Chance encounters in these spaces fuel the energy of campus life and serve as the jumping off point for key college memories. A place of prospect and refuge would help students actively connect.
More Than Classrooms
Without a unifying aesthetic or theme, the buildings of Prairie View left the palate wide open for Overland to create a truly new and special facility for the campus. They saw value in the site that even the client had underestimated. Stately trees, proximity to The Hill, and the central location on campus made it the optimum site for a signature building of practical and symbolic importance. Overland proposed a multipurpose building, where informal collaboration and connection would happen naturally as students and faculty inhabited the space.
A Campus With A Pulse The three enormous oaks gave shape to the building. As a transparent ground floor wraps around the trees, it creates a natural courtyard with visibility in all directions. Students seated on benches outside are part of a kinetic landscape of students moving inside the building, lending vitality to the campus.

The design team maximized the building’s connection to The Hill through a series of porches and a lounge where Hump Day on the Hill DJs could operate in inclement weather. Student and recruiting organizations will be able to set up shop among the porches, and the university will have an official monitor to broadcast announcements.

Economical design also allowed Overland to add an auditorium overlooking The Hill, an unexpected amenity for the client. “I think the building is going to be a complete game changer for the university,” said Principal in Charge Bob Shemwell.

A tower displaying the time and the phases of the moon highlights the integral role of time in business and agriculture. During significant campus events the tower will light up in the school colors, a beacon of school pride. Equally invigorating, the building’s classrooms are designed to accommodate Socratic methodology. Intimate horse-shoe shaped classrooms facilitate conversation and collaboration, intended to continue as students push out into the common space after class.

The north-south wing of the L-shaped building houses the College of Business, marked in with blue accents. Green accents will signify the College of Agriculture in the east-west wing. The brick exterior borrows from historic typologies to create a modern pattern based on an elegant mathematical equation. Elements from other campus buildings show up in moments of the building’s skin, including the dark metal along the auditorium. Ultimately, the Prairie View A&M University Agriculture and Business Multipurpose Building is about building connections—between students and between modernity and tradition. It will claim the center of campus, acting as the heart of student life and activity. 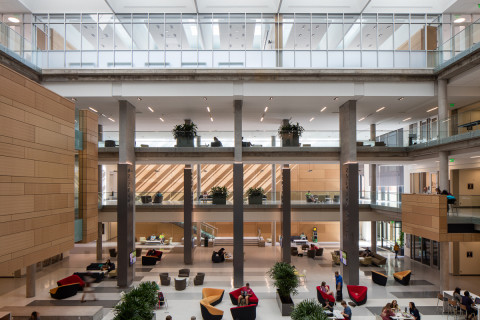 The University of Texas at Dallas
Davidson-Gundy Alumni CenterRichardson, Texas