A contemporary reimagining of a small cottage in a historic district by the Pacific Ocean, Odyssey was redesigned with the intention of becoming an idyllic getaway for entertaining friends and houseguests.

The Stuff Of Dreams
When the clients purchased a getaway cottage in the quiet bayside village of Carmel-By-The-Sea, they could see the incredible potential of the site with its bayside location in a historic artists’ community. But over the years the home had begun to deteriorate, and its location in a historic district prevented it from being torn down. In addition, the layout had never functioned well for gatherings, and views of the nearby ocean were entirely obscured. The clients wanted their cottage to have a contemporary feel while respecting the historic integrity of the neighborhood, and so they brought on Overland to redesign the home into a contemporary retreat.
Rooms With A View

One of the largest problems facing the design team was the cottage’s restricted mobility and lack of view to the nearby Pacific Ocean. Rooms were not well connected to one another, and there was limited interaction with the outdoors.

Overland addressed these limitations by altering the existing structure without destroying the original footprint, which consists of a dining room, kitchen, bath, and living room on the first floor, a master bedroom on the second floor, and a basement-level guest room. The solution for connecting these spaces was to organize everything around a central core, using steps rather than hallways to allow easy access from one part of the home to another. To create a feeling of openness at the core, the living room was lowered to allow for increased ceiling height, and for viewing the ocean, a terrace was added to the second floor. Most significantly, the original front gable was replaced with a flat green roof— the first of its kind in ecologically concerned Carmel-by-the-Sea—to control stormwater runoff and reduce energy usage.

In addition, the client’s passion for the home was so great that they served as the general contractor for the project—literally building it with their own hands from the ground up in phases in order to maintain compliance with the historic district’s codes and regulations.  All details were custom-made and impeccably crafted, with the façade and interior’s teak being free of
screws, nails, or visible fasteners of any kind. A Collaborative Work Of Art

According to Principal in Charge, Rick Archer, the solution to balancing the historic with the contemporary was to be found in the careful selection of materials. Floors, walls, and stairs were made from raw timber and stone, which are commonly found in the area’s more traditional structures. Contemporary glass artist Gordon Huether was brought in to design patterned glass panels that open up the space to natural light and can be made to feel contemporary with the addition of artificial colored lighting.

Today the owners of Odyssey enjoy a home that beautifully suits their lifestyle. With its cozy jewel-like interior and its peaceful view from the terrace, their cottage by the bay provides a warm and inviting atmosphere, a perfect setting for offering their guests the ultimate retreat. Since the renovation was completed, Odyssey has become the architectural prototype for several new homes and renovations in the Carmel area. 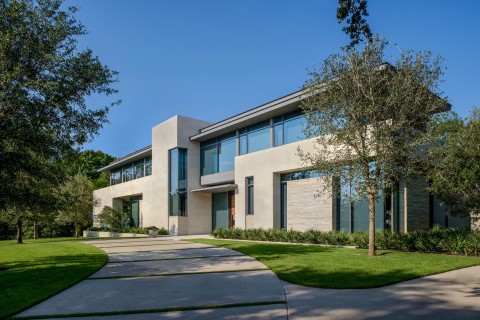